From Project Diablo 2 Wiki
(Redirected from Pandemonium Talisman)
Jump to navigation Jump to search
Translate this page; This page contains changes which are not marked for translation.

This page lists Horadric Cube recipes in PD2, and covers what has changed from the vanilla game. Keep in mind that while many vanilla recipes are quite useful, many others are not.

Flawless Gems, Perfect Gems, and all Runes are now stackable. They can be switched between their stacked and unstacked forms by cubing them. Some other items are newly stackable as well, and those items can be stacked/unstacked in the same way.

Larzuk's Puzzlebox is a new item in PD2 that adds 2-4 sockets to two-handed weapons or 1-2 sockets to other items, with equal chances for the number of sockets added. It has a droprate that is similar to a high rune (same TC as Gul/Vex) and can be quite valuable since it can be used alongside Worldstone Shards to get items with both corruption modifiers and multiple sockets.

Note: Pointmod chances are increased based on the character's level, up to level 94

Popular imbue targets are diadems for characters of any level and pointmod-capable items for level 71+ characters. Imbuing other items at lower levels can result in useable items, but will usually prevent the best affixes from having a chance to appear.

Jewel Fragments are new items in PD2 - they have no affixes and cannot be socketed into equipment, but can stack up to 50 and be used like jewels for recipes.

Killing the Cow King will no longer prevent you from opening the Secret Cow Level. Uber Keys now have slightly different colors to help differentiate them, and are now also dropped by Blood Raven, Bloodwitch, and Izual in Hell difficulty. Uber Keys now have a 100% droprate rather than an average of 8.2% - 1/14 (Terror), 1/11 (Hate), 1/12 (Destruction).

Tainted Worldstone Shards are dropped by Rathma and can be used to corrupt Annihilus. They cannot be corrupted more than once. 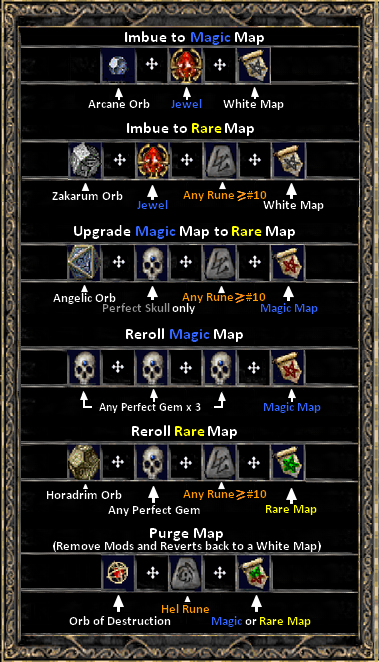 Retrieved from "https://wiki.projectdiablo2.com/w/index.php?title=Recipes&oldid=13693#Other_Items"
Cookies help us deliver our services. By using our services, you agree to our use of cookies.