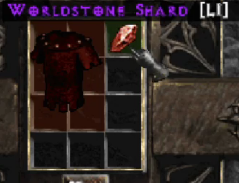 Worldstone Shards are new items which drop throughout the game and can be used to corrupt equipment and maps. Corruption results include adding sockets (if applicable), adding a corruption modifier as listed below, or turning the item into a random rare of the same type ("bricked" item). Items cannot be corrupted more than once.

To use a Worldstone Shard, put it into the Horadric Cube with another item and press the Transmute button. For maps, press the button twice.

There are also Tainted Worldstone Shards which are dropped by Rathma and can be used to corrupt Annihilus.

Equipment items can gain sockets (if applicable), gain a corruption modifier, or turn into a random rare.

Sockets can only be added to 0-socket items that are capable of gaining sockets: helms, chests, shields, and non-throwing weapons. The maximum sockets an item can get is always restricted by the item base. For example, an un-upgraded Vampire Gaze cannot gain more than 2 sockets because Grim Helm has a maximum of 2 sockets.

Regular items (ethereal or non-ethereal) cannot gain corruption modifiers, but can gain sockets (up to the maximum amount of sockets for that item) or turn into a random rare. Runewords are built in regular items that already have sockets, so they can't be corrupted. Corrupting a regular item is akin to using the socketing recipe on it, and can even be done with inferior/superior items.

For non-regular items, if the corruption result adds sockets, these are the odds for how many sockets may be added:

Socketable items can be further improved with the relatively uncommon Larzuk's Puzzlebox, which can be used to add 2-4 sockets to two-handed weapons or 1-2 sockets to other items. Note that while it can't add sockets to throwing weapons, it is currently bugged and will still be consumed if used on them.

In ideal circumstances, players can either aim for max-socket corruptions, or high-rarity corruptions with sockets added by puzzleboxes. High-rarity corruption modifiers are generally slightly stronger than 2 sockets on weapons or 1 socket on armors and are therefore best-in-slot for most scenarios, however more sockets allows for more customization.

Due to the value of puzzleboxes compared to worldstone shards, it's generally better to corrupt items before puzzleboxing them. Using a puzzlebox first will result in a higher chance to get a corruption modifier when corrupting (75% instead of 50%), but the chance to "brick" the item remains the same (25%) so the puzzlebox may be wasted.

Tainted Worldstone Shard drops from Rathma and can be used to corrupt Annihilus, adding a corruption modifier and a cosmetic red tint. Each outcome is equally likely (25%) and there is no chance for the item to "brick".

Retrieved from "https://wiki.projectdiablo2.com/w/index.php?title=Corruptions&oldid=10994"
Cookies help us deliver our services. By using our services, you agree to our use of cookies.